To share your memory on the wall of Warren Proctor , sign in using one of the following options:

Warren graduated from Unionville High School. He married Vera Louise Arnold on September 1, 1941 in Unionville, MO. He was a farmer his entire life. He also worked at Morrell’s from 1956 -1973. He was a lifetime Farm Bureau Member, and was elected into the Farm Bureau Hall of Fame in 2013. Warren was a man of true hard work.

To send flowers to the family or plant a tree in memory of Warren Calvin Proctor , please visit our Heartfelt Sympathies Store.

Receive notifications about information and event scheduling for Warren

We encourage you to share your most beloved memories of Warren here, so that the family and other loved ones can always see it. You can upload cherished photographs, or share your favorite stories, and can even comment on those shared by others.

COLEMAN TAYLOR SOUTHAVEN, COLEMAN TAYLOR #385, and other have sent flowers to the family of Warren Calvin Proctor .
Show you care by sending flowers

Posted Feb 19, 2019 at 10:42am
I have fond memories that my Mother Mildred and Father Red Brandt have shared of your father. The funniest being Warren having snakes in the top pocket of his bib overhauls! Also all the "cat" her would feed. They all had a white stripe down the back.
Comment Share
Share via:
MI

You & your family have my sympathy! I loved Warren AND ALL HIS JOKES!! AND his Snakes!! OMG—hated them — and he knew it!!
Lots of good memories from down in that neighborhood!
We need to have a reunion/get-together for all to get re-acquainted!
Wish I could be there to give you each a hug in person but due to the winter weather here in NW Ia-I won’t be able to make it tomorrow! Milan was planning to come but he hurt his foot today so won’t be able to make it! Marilyn & Merle winter in AZ. Mona lives in AZ & Madelyn is in Florida for the winter!
The Proctor’s, Faber’s, Gillen’s, & Sinclair’s have many memories together growing up! Too many to list!!
It’s tough to lose our parents—they have been there all our lives!!! Life does go on! They may be gone but we still have the memories!! Forever! Lots of good ones!
Thanks for always bringing your Mom & Dad to Mom’s Birthday parties in ANKENY! It meant a lot to her as well as we Kids! Also for showing up at the cemetery for Mom & MARION!
I remember Warren sitting in Floyd’s pickup at MARION’s! He didn’t get out - but he was there—to see we kids!!!! We did appreciate it!
Each of you give your Mom a hug from me & know that I will be thinking about you all tomorrow at this difficult time!!!
Hugs & Prayers,
Martha (Sinclair) ILLG. One of “The 7 “M’s”
1003 120th St
Bode, IA, 50519
515-368-2534
martyillg@gmail.com

Carolyn (Faber) Hunter just sent me your phone #’s & addresses!! (Thank you Carolyn) I WILL BE IN TOUCH!!

Posted Feb 18, 2019 at 12:18pm
We are deeply sorry about your families loss. Thoughts are prayers are with you all at this difficult time. 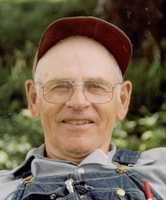 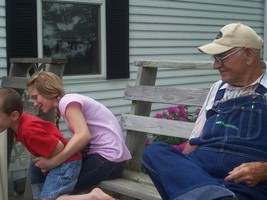 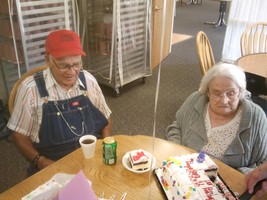 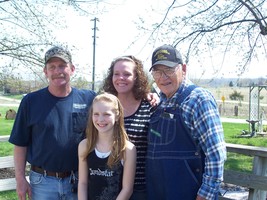