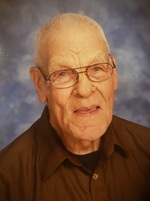 Shirley Junior Townsend, age 89, passed away on Saturday, January 23, 2021 West Ridge Specialty Care in Knoxville, under the care of Care Initiatives Hospice. He was born April 10, 1931 to Shirley and Gladys (McDanel) Townsend on a farm in Appanoose County, near Moravia. Shirley was known to family and friends as Junior.

He grew up living on farms in Appanoose and Davis counties and for a short time in northern Missouri. He attended country schools with the last one being near Unionville, Iowa. Junior helped his dad on the farms until his father passed away. He worked laying pipe line for Rathbun Rural Water when that project started. working mainly in the trenches due to his great strength. He also worked at the Box Factory in Centerville for awhile. He then went to work for himself mowing private and business yards and several cemeteries during the summer months and performing snow removal during the winter.

Junior loved his family, and they brought him so much joy. He especially loved the babies and little kids. That love never diminished as they became older. He was so proud of all of his nieces and nephews. Jr never knew a stranger, he always had a kind word, and a smile for everyone, and soon he was sharing a laugh or two with them.