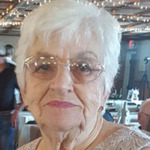 Ruth DeWeese, 84 of Sigourney, died Monday, September 3, 2018 at her home. She was born to Otto and Emma Ruggles on July 6, 1934. She graduated from Ollie High School. She married Don Chambers in 1952 and to this union Dianna (Don) Hill of St. Louis, Missouri, Robert Chambers and friend Bonnie Greiner of Packwood, John & Pam Chambers of Independence and Richard Chambers of Fairfield. She raised her children in Richland and worked at Jefferson County Hospital in Fairfield.She married Norman DeWeese September 29, 1978 and together raised Ed DeWeese of Delta, late Timothy DeWeese, late Brian DeWeese, Mike (Kim) DeWeese of Ottumwa, Terri DeWeese of Des Moines and Julie (Mike) Wolf of Parkston, South Dakota. She worked at home tending to the children and enjoyed gardening and planting flowers while also caring for the elderly at Sigourney Manor House. Her love for children helped her advocate for the Boys Town of Omaha and for St. Jude's Children Research.Norman and Ruth enjoyed many years wintering in Texas.They lived in Delta until recently moving into Deer View Assisted Living in Sigourney.She was preceded in death by her parents, Otto and Emma Ruggles, brothers Rex Ruggles and Mickey Ruggles. Sister-in-laws Dorothy Van Veen, Sarah Estes, Opal Gearheard, Lola Campbell, Veda Vance and brother-in-laws Bob and John DeWeese.Surviving are her husband Norman of Sigourney, children Dianna, Robert, John, Richard, Ed, Mike, Terri and Julie. Grandchildren Donya and Daniel; Stefanie and Justin; Cory, Tonya and Sonya; Joshua, Jay and Sam; Jeremy; Shawn; Ryan, Matt, Mary Kay and Dakota; Amber; Derek, Austin and Alex. Many great grandchildren, sisters Jackie (Leo) Fowler of Delta, Irene (Garry) Kensler of Peoria, Illinois and Cecil (Sandy) of Abingdon, Illinois. Sister-in-law Norma (Jerry) Sparks of Knoxville and Karen Poe of Albia and many nephews, nieces, cousins and friends.Celebration of Life will be held on Friday at 5:00 p.m., September 7, 2018 at the Sigourney Christian Church, 308 S. Jefferson St with fellowship to follow.

To send flowers to the family or plant a tree in memory of Ruth DeWeese, please visit our Heartfelt Sympathies Store.