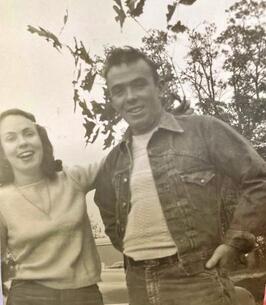 A Mass of Christian Burial will take place Saturday, Sept. 25, 2021, at 11 a.m. at St. Patrick’s Catholic Church in Georgetown for Rosanne Roan Baron and Patrick Joseph Roan Jr., beloved siblings and Monroe County natives who died within months of each other in 2020. Interment will follow at St. Patrick’s Cemetery followed by a luncheon in the Church hall. We invite friends and family to join us.

Rosanne Roan Baron was born in Georgetown, Iowa, on March 21, 1926. The eldest of six, she and her siblings grew up in Georgetown with their parents Patrick Roan and Margaret Trollan Roan. Rosanne attended Ottumwa Heights Boarding School, graduating into the Education program at Mary Crest College in Davenport. While studying, she met her husband, Enrique “Hank” Baron. Once married, they moved to Monterey, Mexico where their eldest daughter Maggie was born. They chased opportunities between the States and Mexico, living in Van Nuys, Calif., and Mexico City where her husband Hank is from. Three children later, Rosanne and Hank eventually settled in San Francisco. Rosanne found home and school community at Tamalpais School in Mill Valley. She was influential to many children and families throughout her career.

Rosanne taught kindergarten for the majority of her teaching career and was a mentor to many of her colleagues. While raising her family and teaching, she obtained a Master’s Degree in Education from Sonoma State University. Rosanne was also very involved at St. Hilary’s Church in Tiburon. She taught religious education and was a respected member of her church and community. Rosanne loved to travel all the world with her husband and was always eager to learn about new places and people. She went through the docent’s program at the Asian Arts Museum. Rosanne especially enjoyed spending time with her children and grandchildren, always providing countless lessons we will cherish forever. She drove into her late eighties and enjoyed picking up her youngest granddaughter, Rosanne Sofia Baron from school. She dedicated her life to her community, her friends, and her family.

Patrick Joseph “Jay” Roan Jr. was born Dec. 4, 1929, in Melrose, Iowa, to Patrick J. Roan and Margaret Agnes Trollan Roan. He was the second of six children. He graduated from Albia High School in 1948 and later moved to Des Moines. He was a member of the National Guard of Iowa for three years, honorably discharged in 1953.

Pat joined the Iowa Power and Light Company in Des Moines in 1950 working his way up from a laborer to a welder by 1955. He retired in 1993 after 43 years with the company, later known as Midwest Gas. Pat trained many young welders and worked on gas mains and pipelines throughout Des Moines and the surrounding area, never failing to respond to emergency jobs, even on holidays.

Pat loved – and was loved equally – by his siblings, many nieces and nephews and wonderful friends. He was admired for his love of life, wonderful sense of human, welding artistry and desire to lend a helping hand to whoever crossed his path. He loved the Saint Louis Cardinals and was a devoted parishioner of St. Ambrose Cathedral in Des Moines for 66 years, serving as an usher for many years. He made many trips to honor his roots in Monroe County, Iowa, and will be interred at St. Patrick’s Catholic Church in Georgetown.