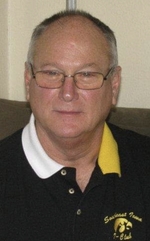 Ronald Dennis Colwell, age 70, of Albia, passed away on Monday, April 6, 2020 at the Monroe County Hospital & Clinics, under the care of Care Initiatives Hospice. He was born on May 3, 1949 in Ottumwa, Iowa to Donald and Wilma (Schakel) Colwell.

Ronald attended Ottumwa High School, graduating Class of 1967. After high school, he enlisted with the United States Army. He married his high school sweetheart, Debbie Ogden on June 9, 1968 at the Ottumwa Sacred Heart Church. They were blessed with three children: Amy, April and Aaron. He worked for Maytag in Newton until his retirement in 1997.

His favorite activities were fishing, camping, snowmobiling, boating, riding his Harley Davidson and playing softball. You could always find Ron on the greens of the Albia Golf Course. He had a true passion for the game of golf and playing it with his buddies. He was an avid Iowa Hawkeye football and Green Bay Packers fan.

A Time of Remembrance will be held at 11:00 a.m., Saturday, May 30, 2020 outside at the Albia Golf Course, followed by a 2-person best shot tournament for Ron’s final round of golf with his buddies. In lieu of flowers, memorials may be directed to family, and will be determined at a later date. Please mail memorials to 521 North 10th St. Albia, Iowa 52531. Online condolences may be left for the family at sinnottfuneralhome.com.