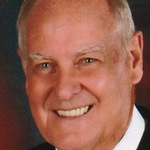 Ron Clester, age 78, of Albia, passed away late Saturday evening, September 19, 2020 at MercyOne Medical Center in Des Moines. He was born July 21, 1942 to Dorothy Yohe and James Clester.  Dorothy and James divorced and she married Leo Caster, who raised Ron as his own.

He grew up in Moravia, and graduated from Moravia High School in 1961.  He married Diane Berry on August 27, 1966.  He worked in the banking business for many years and retired from Peoples State Bank in 2008.

Ron loved golf, photography and to travel with Diane.  They both had a love for dogs and gave many of them a loving home for years.  He was a member of the Chamber of Commerce in Albia.  In his later years he really enjoyed cooking and barbecuing on his lovely patio.  He also loved playing cards, listening to music, and watching TV and movies.

He was preceded in death by his parents, and brother Dennis. Grandparents Max and Jessie Yohe of Albia,  Sister-in-law Donna (Rich) Wilcox, Brother-in-law Glen Beck. He is survived by his wife Diane of Albia, Brother-in-law Chuck (JoAnne) Berry of Grimes, and sister-in-law Beverly Beck of Des Moines, and many cousins  and nieces and nephews.

Funeral Services will be held at 11:00 a.m., Friday, September 25, 2020 at Sinnott Funeral Home in Albia with Pastor Richard Grimes officiating. Visitation will also be on Friday, from 9:00 a.m. - 11:00 a.m., at Sinnott Funeral Home in Albia. Inurnment will take place at a later date in St. Patrick’s Cemetery in Georgetown. Services will be live streamed on the Sinnott Funeral Home facebook page. According to the rules put in place by the Iowa Department of Public Health, proper social distancing and reasonable personal protective equipment is advised for attending a religious public event. Memorials may be directed to the Welcome Home Soldier Monument in Albia. Online condolences may be left for the family at sinnottfuneralhome.com.