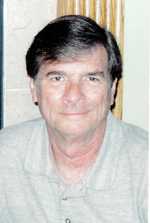 Richard Eugene McDonough, age 76, of Bondurant passed away on Monday, September 14, 2020 at Trinity Center at Luther Park in Des Moines.  He was born on December 18, 1943 to Thomas and Marie (Vroegh) McDonough of Eddyville, Iowa.

Richard attended the Iowa School for the Deaf in Council Bluffs, graduating in 1964.  He married Pamela Sue DeMoss on October 26, 1968, and they were blessed with three children: Tina, Susan, and Tim whom they raised in Ankeny, Iowa.

Richard worked for the Des Moines Register for 18 years as a graphic artist.  He participated in bowling and pool leagues for many years. He also enjoyed fishing, hunting, and had a passion for oil painting.

Funeral Services will be held at 10:30 a.m., Friday, September 18, 2020 at Sinnott Funeral Home in Albia with Pastor Chris Harris officiating.  Interment will follow in Cuba Cemetery in Avery.  Visitation will be on Friday, September 18, 2020, from 9:30 - 10:30 a.m. at Sinnott Funeral Home in Albia.  Memorials may be directed to the Iowa School for the Deaf.  Online condolences may be left for the family at sinnottfuneralhome.com.