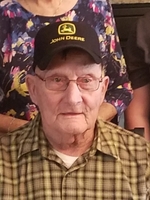 Richard Gene Bricker, age 87, of Moravia passed away on Saturday, October 19, 2019 of complications from cancer, at his residence under the care of EveryStep Hospice. He was born in Williamson, Iowa to George H. and Suzy (Johnson) Bricker on September 7, 1932.

Richard married Louise Aubrey On April 21, 1955 in Ottumwa, and they were blessed with three children, Debra, Pam, and Cindy. He was enlisted with the United States Army, and fought in the Korean War. He worked at John Deere, retiring in 1994.

Celebration of Life Services will be held at 10:30 a.m., Friday, October 25, 2019 at the Trinity United Methodist Church in Albia with Rev. Roger Henry and Pastor Terry Chapman officiating. Inurnment will follow in Oakview Cemetery with military rites conducted by the American Legion of Albia, Lovilia, and Melrose, and also the Patriot Guard. Visitation will be held on Thursday, October 24, 2019 opening to the public at 1:00 p.m., and Richard’s family will be present to greet friends from 4-7 p.m. at Sinnott Funeral Home in Albia. Memorials may be directed to EveryStep Hospice or to the Multiple Myeloma Foundation. Online condolences may be left for the family at sinnottfuneralhome.com.