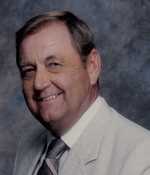 Philip Raymond Lundstrom, age 83, of Lovilia passed away on Thursday evening, May 9, 2019 at the Monroe Care Center in Albia, under the care of EveryStep Hospice. He was born in Hiteman, Iowa to Oscar and Goldie (Bacon) Lundstrom on November 10, 1935.

Phil graduated from Albia High School, class of 1953. He enlisted with the United States Air Force in 1954. He served in the Korean Conflict and also served in Thailand during the Vietnam War. He was stationed in Lincoln AFB in Nebraska, Laon AFB in France, Vandenberg AFB in California, Norton AFB in California, and then Langley AFB in Virginia where he was superintendent of the precision photographic equipment systems maintenance section at Tactical Air Command Headquarters.

He married Sheila Barnes on August 18, 1955 at the Lovilia United Methodist Church in Lovilia, and they were blessed with three children, Gail Marie, Gary Raymond, and James Philip. He retired as a SMSgt after twenty years of distinguished service. Only two percent percent of the total listed force held this rank. He then worked at 3M in Knoxville as a warehouse supervisor, retiring in 1993.

He was a member of the Lovilia United Methodist Church, serving on various committees throughout the years. He was an avid golfer, obtaining four hole in one’s throughout his life. He enjoyed playing golf tournaments with friends, and winning several along the way.

Survivors include his wife Sheila of Lovilia; children, Gail M. Lundstrom of Iowa City, Gary R. Lundstrom of Sedalia, James P. Lundstrom of Wright City, MO, one grandson, James H.P. Hobart, Alicia and Lexi all of Solon, Iowa. He is also survived by several nieces, nephews, and friends. He was preceded in death by his parents, Oscar and Goldie; two brothers, Vernon and Merle Lundstrom; sister, Lois Jamieson.

Funeral Services will be held at 10:30 a.m., on Wednesday, May 15, 2019 at Sinnott Funeral Home in Albia with Rev. Raymond Doser officiating. Interment will follow in Woodlawn Cemetery in Lovilia with military rites conducted by the American Legion of Albia, Melrose and Lovilia. Visitation will be held on Tuesday, opening to the public at 1:00 p.m., and Phil’s family will be present to greet friends from 4-7 p.m. at Sinnott Funeral Home in Albia. Memorials may be directed to Lovilia United Methodist Church, Welcome Home Soldier, or Edmundson Golf Course.