In Memory of
Paul Eugene
Dicks
1929 - 2018
Click above to light a memorial candle.
Memorial Candle Tribute From
Sinnott Funeral Home
"We are honored to provide this Book of Memories to the family."
View full message >>>
Send Flowers
Menu 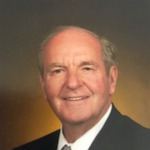 Paul Eugene Dicks, age 88, of Marshalltown, formerly of Moravia, passed from life on July 11, 2018 at the Southridge Nursing and Rehabilitation Center in Marshalltown. Paul was born October 31, 1929 to Truxton and Glennie (Scott) Dicks. He was one of three children with brothers, Donald and Richard.Paul was joined in marriage to Phyllis Jeannette Laws on April 2, 1950. From this union came two children: Nick Paul Dicks and Fonda Joleen Dicks.Paul farmed 500 acres in Appanoose county all his working life. His century farm was recognized in 1979 with the farm originating in 1853. The barn from his farm still stands today next to the Mormon trail marker. Paul and his wife Phyllis were married 62 years and loved traveling and wintering in Texas for fourteen years. Their shuffle boarding trophies adorned his dresser but he loved his family the most. He was a lifetime member of the Masonic Lodge #252 and was initiated into service in 1951. Paul was a long time member of the Iconium United Methodist Church. Paul will be missed by all who knew him.He is survived by his daughter, Fonda (Mark) Hopp, both of Marshalltown; six grandchildren, Erin (Matt) Thompson, Nathan (Brittany) Dicks, Kelly (Jacob) Bedard, Geoffrey Dicks, Jessica (Chris) Lesley, and Ashley (Souli) Chanthavong, and 10 great grandchildren. Paul was preceded in death by the love of his life Phyllis and his beloved son, Nick.Celebration of Life Services will be held on Friday, July 20, 2018, at 11:00 a.m., at Sinnott Funeral Home in Albia with Pastor Richard Grimes officiating. Inurnment will be in Hillcrest Cemetery in Moravia. Memorials may be directed to the Iconium United Methodist Church. Online condolences may be left for the family at sinnottfuneralhome.com.

To send flowers to the family or plant a tree in memory of Paul Eugene Dicks, please visit our Heartfelt Sympathies Store.