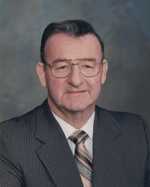 Monte attended school in Albia, graduating with the class of 1948. He married Marilyn Kearney on September 22, 1951. They were blessed with three daughters and two sons. He worked at John Morrell in Ottumwa until it closed and then at John Deere, retiring in 1991.

His favorite activities were hunting, fishing and mushrooming. He enjoyed playing cards and drinking beer with his buddies. You could always find Monte driving his golf cart around town, sharing some of his famous humor with people. Most of all, he enjoyed spending time with his family.

He is survived by his wife of 68 years, Marilyn of Albia; his children Diana (Mark) Davis, Debi (Terry) Knowles, Michelle (Steve) Chambers, Steve (Mary Clouse) Robnett, John Robnett; ten grandchildren, fourteen great-grandchildren and six great-great grandchildren. He is preceded in death by his parents, Fred and Blanche and one sister Lorraine Ellis.

A Mass of Christian Burial will be held at 10:30 a.m., Saturday, June 27, 2020 at St. Mary's Catholic Church in Albia with Father Mark Yates, C.PP.S. officiating. Due to church restrictions, a mask will be required during the funeral mass. Services will be live streamed on the funeral home facebook page. Inurnment will follow services in St. Mary's Cemetery in Weller with military rites conducted by the American Legion of Albia, Lovilia, and Melrose. Visitation will be held on Friday, June 26, 2020 from 3-7 p.m., at Sinnott Funeral Home in Albia.  In lieu of flowers, memorials may go to the family in Monte's name and a bench will be installed at one of his hunting spots at Rathbun Lake. Online condolences may be left for the family at sinnottfuneralhome.com.