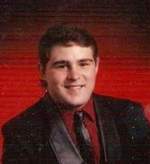 Michael Allen Terrell Sr, age 47, of Albia, entered eternal life on March 20, 2020 at Monroe County Hospital, under the care of EveryStep Hospice. Michael was born in Cedar Rapids on September 12, 1972 to Wendell and Joanne (Perkins) Terrell.

He graduated from Eddyville High School, class of 1991 and participated in many sports. Mike had a daughter, Jacqueline who was born in 1992. He then met his wife in 1994 at a wedding which he was the DJ. He married Carrie Ann Skinner on August 15, 1998 in which four children were born: Michael Jr., Tahylor, Marrisa, and Trevor. Mike worked for McCurdy Seed, Dennis Brown, Pepsi, Wright Trees, Decatur County Sheriffs Department, Kmart, Casey’s, Cargill in Ottumwa, AYM, and Weiler where he was a machinist.

Mike was an avid sports fan, especially for the Iowa Hawkeyes. He loved going hunting with his father, and fishing, gaming, grilling, camping, cooking, and music with family. He also loved computers and gambling. He enjoyed joking with his children, calling each other “dummy” “you rat” “shut-up”. He loved riding roller coasters with kids’ and roller skating with some tumbles that would last weeks. He also loved scary movies, science fiction, history, and of course his politics (Trump 2020)

Visitation will be held on Wednesday, March 25, 2020, and also Thursday, March 26, 2020 from 4-7 p.m. at Sinnott Funeral Home in Albia. In light of the public health situation we ask for attendees of the visitation to be aware of the number of vehicles in the parking lot. Only 10 people will be allowed in the building at one time. Private family Graveside Services will be held on Friday, March 27, 2020 in Pleasant Corners Cemetery. Memorials may be directed to the family in Michaels name, and mailed to 403 North 9th St., Albia, Iowa. 52531. Online condolences may be directed to the family at sinnottfuneralhome.com.