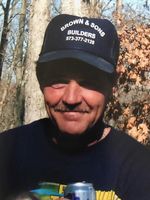 Michael Larry Brown, age 62, of the Lake of the Ozarks, formerly of Knoxville, passed away on April 5, 2019 in Knoxville, Iowa under the care of EveryStep Hospice. He was born on August 16, 1956 in Des Moines to C. Larry and Mary Rose “Dethrow” Brown.

He attended Knoxville High School. Mike was trained in the family business (Brown and Son’s Builders) by his father Larry to be a siding contractor and carpenter. Like his father, Mike was very skilled and meticulous at his work. He was well respected by his friends, customers, and community. He also drove grain trucks for McCormick Feed and Grain in Knoxville. He lost his only son, Clinton Larry Brown at birth.

He loved volunteering for the local Buffalo Cove Community Watch. He also served as a volunteer firefighter in the Stover area. He frequently volunteered for the Toys for Tots drives during Christmas time. Mike was also a very good mechanic and owned many muscle cars. He enjoyed boating with family and friends on the Lake of the Ozarks. His home was a favorite vacation spot for all family members.