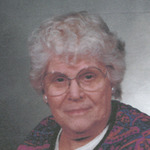 Mary Jane (Cherry) Patrick, age 94, passed away on June 28, 2018 at her daughter Kathy’s home in Ft. Worth, Texas. Mary Jane was born July 1, 1923 in Ottumwa, Iowa to Leonard and Ethel Cherry. She married Donald I. Patrick of Ottumwa on June 28, 1946 at The Little Brown Church in Nashua, Iowa. The Lord has once again joined them together for eternity on their special day. Mary Jane is survived by four of her five children: Donald I. (Pamela) Patrick Jr. of Cameron, IL, Dr. Kathy Weseman of Ft. Worth, TX, Larry (Dianne) Patrick of Ottumwa, Iowa, and Edward (Sandy) Patrick of Ottumwa, Iowa. She is also survived by 10 grandchildren and 16 great-grandchildren. Mary Jane is preceded in death by her parents, her husband Donald I. Patrick, daughter Theresa Jane Patrick of Ottumwa, her three brothers -Leonard Cherry Jr., Robert Cherry, and JS Cherry; and her infant grandson Christopher Patrick. Mary Jane graduated from Ottumwa High School in 1942, where she was on the Shark Club swimming team, and St. Joseph Hospital School of Nursing in Ottumwa in February, 1946. Mary Jane was in the Girl Scouts for over eight years, which included being a troop leader and Waterfront Camp Director for several summers during high school and nurses training. During high school and nurses training Mary Jane worked as a Red Cross Lifeguard instructor at the Ottumwa Municipal Pool where she developed and trained other instructors to teach American Red Cross swimming classes. Mary Jane spent the last six months of her nurse’s training in the U.S. Cadet Nurse Corps stationed at Schick Army Hospital in Clinton, Iowa. Mary Jane worked at St. Joseph Hospital in Ottumwa as a staff nurse and Director of Nursing for over 20 years. Mary Jane was a CNA and ADN clinical nursing instructor at Indian Hills Community College in Ottumwa for several years after retiring from hospital work. Mary Jane was a certified EMT and paramedic Instructor for the Iowa Law Enforcement Academic Council in Ottumwa and served over 20 years as nursing council advisor at Sunnyslope Care Facility in Ottumwa. Mary Jane served on the Iowa Governor’s Advisory Council on Aging for Southeast Iowa and was awarded the Partners in Aging Award in 1994. Mary Jane was a lifetime member of the National and Wapello County Genealogy and Historical Societies. Mary Jane and her husband, Donald, receiving the Iowa Genealogists of the Year Award in 1996. Mary Jane and Donald were also Lifetime members of Good Sam’s Camping Club. While raising her family Mary Jane volunteered as a girls’ club 4-H leader for over five years.After cremation there will be a graveside service only July 9, 2018 @ 10:30 AM @ Shaul Cemetery in Ottumwa, Iowa with Rev. Jeremy Skinner of the Good Samaritan Society in Ottumwa officiating. Sinnott Funeral Home in Ottumwa will be coordinating the arrangements. In lieu of flowers (there will not be a viewing or funeral service at the funeral home) please send any desired donations to either the Wapello County Historical Society or the Wapello County Genealogy Society.

To send flowers to the family of Mary Jane Patrick, please visit our Heartfelt Sympathies Store.