To share your memory on the wall of Mary Judge , sign in using one of the following options:

Print
Mary “Virginia” Judge, age 85, passed away on Tuesday, May 26, 2020 at the Lucas County Health Center in Chariton. She was born on July 29, 1934 at the Conway family farm in Melrose to Francis and Mary (Conway) Sullivan.

Virginia ma... Read More
Mary “Virginia” Judge, age 85, passed away on Tuesday, May 26, 2020 at the Lucas County Health Center in Chariton. She was born on July 29, 1934 at the Conway family farm in Melrose to Francis and Mary (Conway) Sullivan.

She was a housewife for most of her life, but also worked at Look magazine briefly before she married. After Chris retired, they lived in Phoenix, Arizona for eight years where she worked at Goldwater’s department store. Her favorite activities were crossword puzzles, talking on the phone and watching CNN politics. She was known for her great pies and her feisty attitude.

Virginia’s body has been cremated. Celebration of Life Services will be held at a later date. Memorials may be directed to St. Jude’s Children’s Hospital in care of Sinnott Funeral Home, 2030 Hwy 5, Albia, Iowa 52531. Online Condolences may be left for the family at sinnottfuneralhome.com.
Read Less

To send flowers to the family or plant a tree in memory of Mary Virginia Judge , please visit our Heartfelt Sympathies Store.

Receive notifications about information and event scheduling for Mary

There are no events scheduled. You can still show your support by sending flowers directly to the family, or planting a memorial tree in memory of Mary Virginia Judge .
Visit the Heartfelt Sympathies Store

We encourage you to share your most beloved memories of Mary here, so that the family and other loved ones can always see it. You can upload cherished photographs, or share your favorite stories, and can even comment on those shared by others.

Posted May 31, 2020 at 10:48pm
My love and sincere sympathy to Chris and all the Judge children and their families. I have such wonderful memories of Virginia. I loved being in her presence, you felt as though you were one of her very favorite people, taking the time to really talk to you!
She was the best. ❤️ Kit Dinneen Crane
Comment Share
Share via:
B

Posted May 29, 2020 at 07:45pm
I remember going to visit with Virgina when my mom Pam Bond used to take me over when we were in town visiting Tim. I always remember how outgoing Virgina was and I loved it! I also add a secret ingredient to saurkrauate to this day that I learned from Virgina and I will make sure I past it on... You will be missed Virginia
Love, Brigit
Comment Share
Share via:

Posted May 28, 2020 at 05:11pm
Oh Virginia! I saw this sad news on F B! Its been years since we briefly became friends in our teenage years! You were an inspiring gal and lots of good memories came of this friendship ! Wish I had got to know you better! My sincere condolences to your beloved family Pauline McGinn Steinbach Des Moines Iowa
Comment Share
Share via:
JA 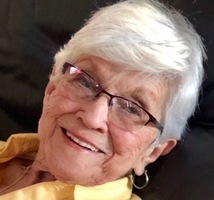