To share your memory on the wall of Kenneth Shepard , sign in using one of the following options:

He grew up and attended Albia Community High School graduating in 1960. After high school, Kenneth joined the United States Air Force and was a member of the 516th FMS Dyess AFB in Abilene, Texas during the Vietnam Era. He was very proud of his military service. On October 28, 1967, he was united in marriage to Helen Marie Crall at St. Patrick's Catholic Church in Georgetown, Iowa. To this union 3 children were born, Larry Eugene, Laura Anne and Mark Alan. They shared almost 53 years of marriage together before his passing.

After proudly serving his country, he returned home and was employed at John Deere Ottumwa Works on April 19, 1965. He worked in many departments over his career, ending in Experimental before his retirement on April 19, 1995. He was proud of his young retirement after giving 30 years. Kenneth also farmed and became an auctioneer during those years. He actively continued farming and loved attending farm auctions to maintain a good line of equipment until his last days.

Kenneth was an original board member of Welcome Home Soldier; lifetime member of the American Legion Howard Cessna Post #136, Albia; associate member of the Knights of Columbus; long-time 4-H, FFA and Fairboard member serving as club leader and Fairboard President over the years. He was recognized with the Honorary FFA Degree in 1998. He was member of Monroe County Cattlemens and Monroe County Farm Bureau where he was inducted into the Farm Bureau Hall of Fame in 2016. Kenneth was a member of Poppin' Johnnies Two-Cylinder Club of Southeast Iowa and involved with the Southern Iowa Vintage Tractor Club. Most of all, Kenneth loved being with family and friends. Whether it was being the proudest fan at his grandkids activities or other sporting events, traveling all over the country to support someone that was important to him or just attending his daily "meetings" to play cards or cribbage. He never knew a stranger and valued all of his relationships.

Funeral Services will be held at 11:00 a.m., Monday November 2, 2020 at Sinnott Funeral Home in Albia with Father Mark Yates C.PP.S. officiating. Interment will follow in St. Mary’s Cemetery in Albia with military rites. Visitation will be held on Sunday, November 1, 2020, opening to the public at 3:00 p.m., with Kenneth’s family present to greet family and friends from 4-7 p.m., Sunday evening at the funeral home. There will also be a Christian Wake Service held at 6:30 p.m., at the funeral home Sunday evening. According to the rules put in place by the Iowa Department of Public Health, proper social distancing and reasonable personal protective equipment is advised for attending a religious public event. Memorials may be directed to the Welcome Home Soldier Monument. Online condolences may be left for the family at sinnottfuneralhome.com.
Read Less

To send flowers to the family or plant a tree in memory of Kenneth E. Shepard , please visit our Heartfelt Sympathies Store.

Receive notifications about information and event scheduling for Kenneth

We encourage you to share your most beloved memories of Kenneth here, so that the family and other loved ones can always see it. You can upload cherished photographs, or share your favorite stories, and can even comment on those shared by others.

The Kinney family, Linda and Willie, Donna and Bill, and Barbara, and other have sent flowers to the family of Kenneth E. Shepard .
Show you care by sending flowers

Posted Oct 26, 2020 at 06:57pm
To the family of Kenny’ Shepard. Kenny was a great classmate in our class of 1960. He was always so much fun to be around. He was also very actively involved in our class reunions and we all relied on Kenny to build the float for our class. I am sure that he will be missed very much in the Albia and surrounding communities. Cherish your wonderful memories.
Comment Share
Share via:
TF

Posted Oct 26, 2020 at 07:28am
Dear Shepard family our hearts go out to you during this hard time. Peace be with you. Love, Phil, Jen and Benton Kinney

The Kinney family purchased flowers for the family of Kenneth Shepard . Send Flowers

Linda and Willie, Donna and Bill, and Barbara

Linda and Willie, Donna and Bill, and Barbara purchased flowers for the family of Kenneth Shepard . Send Flowers

Posted Oct 25, 2020 at 09:22pm
Dear Helen and family, We wish we could be there for you all. Please know your family in Australia loves you and will be praying for you all. 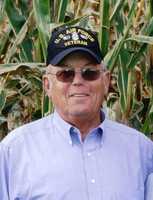