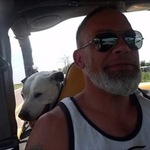 Josh graduated from Albia High School, Class of 1993. He then enlisted with the United States Army. He married Sarah Long on June 11, 2001, and they were blessed with one son, Hayden. Hayden was Josh’s entire being. He cherished all time spent with him and enjoyed spending money on him when it wasn’t even needed. Josh and Sarah later divorced. Josh reenlisted immediately following 9/11 and was sent to Iraq.

Josh most recently worked as manager for Lockridge Lumber and Hardware in Chariton. He started boxing golden gloves at a young age, and turned professional at the age of 22 for Capital Promotions. He had a very successful career, and decided to turn his talents to the cage fighting MMA. He was an avid Chicago Bears, New York Yankees, and Iowa Hawkeye fan. Josh enjoyed grilling, riding his motorcycle, lifting weights, collecting gnomes, riding in his jeep, and especially spending time with his beloved dog Callie and son Hayden.

Josh is survived by his son, Hayden of Albia; mother, Darla (Al) Safford of West Palm Beach, FL; sister, Stephanie Gutcher of FL; two nephews, Kody and Kolton Kjolstad, and many aunts, uncles, cousins, and friends. He is also survived by best friend, Mike Fabert, and beloved dog, Callie. He was preceded in death by his father, Gary Gutcher, grandparents, Gerald and Marilyn VandenBerg, and Junior and Roberta Gutcher, and sister, Sarah Anne Gutcher.

A Celebration of Life Visitation will be held on Thursday, June 25, 2020 from 4:00 - 7:00 p.m. at Sinnott Funeral Home in Albia. Military rites will be conducted by the American Legion of Albia, Lovilia, and Melrose at 5:00 p.m., Thursday evening at the funeral home, and a time of sharing will be at 6:30 p.m. Memorials may be directed to the family. Online condolences may be left for the family at sinnottfuneralhome.com