To share your memory on the wall of Josh Gutcher, sign in using one of the following options:

Josh graduated from Albia High School, Class of 1993. He then enlisted with the United States Army. He married Sarah Long on June 11, 2001, and they were blessed with one son, Hayden. Hayden was Josh’s entire being. He cherished all time spent with him and enjoyed spending money on him when it wasn’t even needed. Josh and Sarah later divorced. Josh reenlisted immediately following 9/11 and was sent to Iraq.

Josh most recently worked as manager for Lockridge Lumber and Hardware in Chariton. He started boxing golden gloves at a young age, and turned professional at the age of 22 for Capital Promotions. He had a very successful career, and decided to turn his talents to the cage fighting MMA. He was an avid Chicago Bears, New York Yankees, and Iowa Hawkeye fan. Josh enjoyed grilling, riding his motorcycle, lifting weights, collecting gnomes, riding in his jeep, and especially spending time with his beloved dog Callie and son Hayden.

Josh is survived by his son, Hayden of Albia; mother, Darla (Al) Safford of West Palm Beach, FL; sister, Stephanie Gutcher of FL; two nephews, Kody and Kolton Kjolstad, and many aunts, uncles, cousins, and friends. He is also survived by best friend, Mike Fabert, and beloved dog, Callie. He was preceded in death by his father, Gary Gutcher, grandparents, Gerald and Marilyn VandenBerg, and Junior and Roberta Gutcher, and sister, Sarah Anne Gutcher.

A Celebration of Life Visitation will be held on Thursday, June 25, 2020 from 4:00 - 7:00 p.m. at Sinnott Funeral Home in Albia. Military rites will be conducted by the American Legion of Albia, Lovilia, and Melrose at 5:00 p.m., Thursday evening at the funeral home, and a time of sharing will be at 6:30 p.m. Memorials may be directed to the family. Online condolences may be left for the family at sinnottfuneralhome.com
Read Less

To send flowers to the family or plant a tree in memory of Josh Gerald Gutcher, please visit our Heartfelt Sympathies Store.

Receive notifications about information and event scheduling for Josh

We encourage you to share your most beloved memories of Josh here, so that the family and other loved ones can always see it. You can upload cherished photographs, or share your favorite stories, and can even comment on those shared by others.

YOUR UROLOGY FAMILY, Your Palm Beach State College Family, and other have sent flowers to the family of Josh Gerald Gutcher.
Show you care by sending flowers

Posted Jun 26, 2020 at 09:02am
To Hayden and Sarah. Hayden we have never met, Sarah I don’t know if you remember me or not but I remember you. My friend Jackson and I were you and Josh’s neighbors on southwest 9th st. 20 plus years ago and I have never forgot those brief times we shared together. I just wanted to share a fond memory of my time with Josh with you so you have it too.
The first time I met Josh he was a “bouncer” at a pool hall called Loco Joes on 22nd street in West Des Moines. He was a good foot taller than me and had a menacing look on his face as he checked my ID. I let it go as I knew he was just doing his job, I didn’t think about it again. Over the time he worked there we gained trust in each other and created a friendship.
Sometime later in our friendship I asked him about when we first met. He told me that he had heard stories about me from other people that made him nervous and that I kind of scared him. After knowing who he was and what he had done that seemed ludicrous to me. A man of his stature and abilities would be threatened of me, gave me a whole new respect for myself that I didn’t have before I met Josh. After that conversation I never felt the urge to prove myself to anyone as far as responding to threats or provocations from others who were trying to prove their self to others. He taught me on of my most valuable life lessons to date.

With the greatest respect and admiration I say with tears in my eyes and sorrow in my heart for both of you and all the lives he touched in the short time he blessed us all, he was a man who earned respect and admiration from all who had the honor to spend time with him. We all just wish we had more of it to spend.
With my deepest regret and condolences I wish you all the best. Josh would not want anything but the best for us all.
I will meet him in Valhalla with open arms and heart.

Posted Jun 24, 2020 at 05:53pm
I knew Josh as a newborn and even knit him a blanket and a pair of booties. Many years passed and I would hear of his success as a boxer, but I never got the chance to watch him fight. I had recently reconnected with Josh and shared some stories of how I knew him and his parents all those years ago. He even helped me celebrate my most recent birthday a few months ago, and he knew how to make an old gal feel special! He was a great guy and loved his son Heydon and his beautiful dog Callie, which is my oldest daughter’s name...he will be missed!!! Sincerely, Carrie Andrew
Comment Share
Share via:
HS 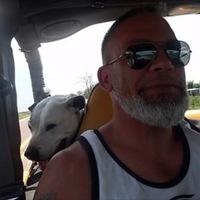 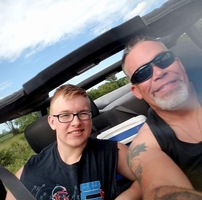