In Memory of
Hugh Graves
Pedrick
1929 - 2018
Click above to light a memorial candle.
Memorial Candle Tribute From
Sinnott Funeral Home
"We are honored to provide this Book of Memories to the family."
View full message >>>
Send Flowers
Menu 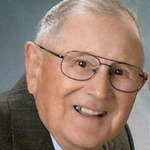 Hugh Graves Pedrick passed away on July 22, 2018 at Mahaska Health Partnership in Oskaloosa, Iowa. Hugh was born on July 28, 1929 to Herbert and Laura (Griswold) Pedrick in Ottumwa, Iowa. He graduated from Ottumwa High School in 1947 and worked at Iowa-Illinois Gas and Electric, where he began as a clerk and was eventually promoted to office manager until his retirement in 1992. Hugh married Roberta Wood in 1956. They have one daughter, Anita (David) Meinert of Oskaloosa. Music played a significant role in his life: he played the trumpet for a time in the 34th Iowa National Guard Band and gigged with the Wally Dean Orchestra. After his retirement, he attended as many concerts as he could; performances at Indian Hills Community College, William Penn University, Municipal Band concerts and especially any concert that his grandchildren were performing in.Hugh and Roberta were active in Wapello County 4-H as leaders and worker bee’s. They were promoters of the Morgan horse in Iowa for thirty-eight years as Morgan horse club members and were elected to the Iowa Horseman Hall of Fame by the Iowa Horse Shows Association. As their daughter’s horse interests evolved into carriage driving, Hugh could always be found with a towel in his hand polishing horse, harness, carriage and driver. He especially loved speed competitions and cross-country courses. He continued to drive his beloved horse Tristan until the gelding’s death in 2016. They could be seen on the back roads of Wapello County, taking a leisurely drive on any good, sunny day.After Hugh and Roberta sold their acreage, they moved to Pennsylvania Place where they enjoyed the company of their friends and the wonderful care of the staff. Hugh was a big hit in the winter months when he would take his corgi for “walks” on the treadmill to keep in shape.Besides his daughter, he is survived by two grandchildren, Laura of Des Moines and Chris of Oskaloosa and his beloved Corgi, Ellie.He was preceded in death by his parents, his three brothers (Ira, Theron, and Albert), one sister (Dorothy Priscilla Criley) and his wife, Roberta.Services will be held at the Sinnott Funeral home, 201 McKinley Ave. Ottumwa, Iowa 52501 on Saturday, July 28, 2018, 1:30 p.m. Family visitation will begin at 10 a.m., preceding the service. Burial will be in the Ottumwa Cemetery. Memorials may be made to the Indian Hills Community College Music Department, Ottumwa, or St. Paul Congregational United Church of Christ in Oskaloosa. Online condolences may be left for the family at sinnottfuneralhome.com. Arrangements are entrusted with Sinnott Funeral Home in Ottumwa.

To send flowers to the family of Hugh Graves Pedrick, please visit our Heartfelt Sympathies Store.