In Memory of
Herbert "Bert"
Whitlock
1939 - 2018
Click above to light a memorial candle.
Memorial Candle Tribute From
Sinnott Funeral Home
"We are honored to provide this Book of Memories to the family."
View full message >>>
Send Flowers
Menu 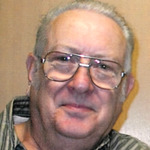 Herbert Joseph “Bert” Whitlock, husband, father, grandfather and friend to all, passed away on Monday, May 28 at the University of Iowa Hospital. He had long battled complications related to multiple myeloma. His beloved wife, Linda was by his side.Bert was a lifelong resident of Monroe County. He was born here on January 15, 1939 to George and Marie (Clark) Whitlock. He attended country schools and graduated from Albia High School in 1956, and later from Centerville Community College. Bert married Linda Bates June 12, 1960. Their love and devotion was an inspiration to everyone who knew them. Bert and Linda had two children, son Randall and daughter Laura. Bert served in the U.S. Army from 1961-63, remaining in the reserves until 1967. He worked as a manufacturing optician for American Optical for 23 years, followed by 17 years at Kness Manufacturing. In addition, Bert worked at Bill Lucas’ Skelly station, Kenneth Hinton’s farm and Merrill Security. In his retirement, he enjoyed assisting electrician Don Kraber. Bert was filled with curiosity and a love of learning throughout his life. He was an avid reader, enjoyed researching anything that sparked his imagination and was unbeatable at Jeopardy. He and Linda traveled all over the U.S. He was especially intrigued by the West. Bert loved spending time with his family, especially his beloved grandsons Nick and Vincent. He enjoyed fishing, camping and bird watching. Perhaps his favorite pastime, however, was good conversation.Bert was preceded in death by his parents and infant brother. He is survived by his wife of nearly 58 years, Linda Whitlock of Albia; son Randall Whitlock of Phoenix, AZ; daughter Laura Whitlock, son-in-law David Charles and grandsons Nick and Vincent Charles of Skokie, IL; sister; Rebecca (Vernon) DeTar of Albia, IA and many nieces, nephews and cousins.Funeral Services will be held at 11:00 a.m., on Friday, June 1, 2018 at The First Christian Church in Albia with Reverend Lynda Carlson officiating.  Cremation rites will follow services and burial will take place at a later date. A luncheon will be served following funeral services at Sinnott Funeral Home in Albia.  ??Visitation will be held on Thursday, May 31, 2018 opening to the public at 1:00 p.m. Family will greet friends from 6-8 p.m., Thursday evening at Sinnott Funeral Home in Albia.  Memorials may be directed to the First Christian Church.

To send flowers to the family or plant a tree in memory of Herbert "Bert" Whitlock, please visit our Heartfelt Sympathies Store.