To share your memory on the wall of Gwen Smith , sign in using one of the following options:


Gwen was the first female official elected in Wapello County, where she served as  County Treasurer and was re-elected during the 1950’s and early 1960's.  Always a maverick, Gwen left home at sixteen with three friends and a Chevy.  Destination: Hollywood.  They would stop whenever they ran out of money, work waitressing jobs until they saved enough money to move on.  They made it to Hollywood, waitressing at a carhop near the movie studios.  She spent some time there, until the traveling spirit struck again and she traveled onward to Fairbanks, Alaska where she worked for the Army and raced trucks on the weekends.  Gwen returned to Ottumwa after her escapades and ran for elected office.  She met and married Richard Eugene Smith in 1954.

Gwen is survived by her daughters, Casey Jean Lind, Cathy Jane Fuhrman, and two grandchildren.  She was preceded in death by her mother, Easter Strong, husband, Richard Eugene Smith, and sister, Betty Kiefer.
Gwen’s body has been cremated with no planned services. Online condolences may be left for the family at sinnottfuneralhome.com. Arrangements entrusted with Sinnott Funeral Home in Ottumwa.
Read Less

To send flowers to the family or plant a tree in memory of Gwen Jean Smith , please visit our Heartfelt Sympathies Store.

There are no events scheduled. You can still show your support by sending flowers directly to the family, or planting a memorial tree in memory of Gwen Jean Smith .
Visit the Heartfelt Sympathies Store

We encourage you to share your most beloved memories of Gwen here, so that the family and other loved ones can always see it. You can upload cherished photographs, or share your favorite stories, and can even comment on those shared by others. 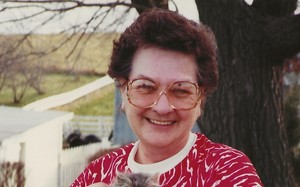