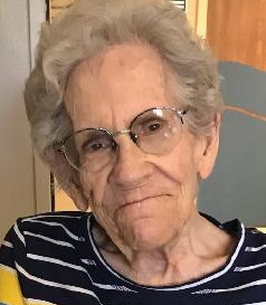 Grace graduated from Albia Community High School in 1948. After graduation, she worked in the office for the John Morrell Co in Ottumwa.

On June 1, 1950 at St Mary’s Catholic Church in Albia, Grace Marie Wilson and Leo David Flattery were united in marriage. Grace and Dave were blessed with six children and sixty years of marriage before Dave’s passing in 2010. Grace and David raised their six children on their farm in the Georgetown community where Grace was an avid gardener who enjoyed canning and jelly making. She also was a great baker, making bread every Saturday for the weekly meals. Her specialty was “Orange Bread”. She also was a quilter & full time homemaker until her children went off to school

She went back to work at Chamberlain Mfg in Albia as a data processing technician until their closing in 1984. She was then employed at Rubbermaid in Centerville, Iowa for several years before retiring. Grace was a former member of the St Patrick’s Catholic Church in Georgetown, a member of St Mary’s Catholic Church in Albia, an active member in the Altar and Rosary Society, and active participant in the Knights of Columbus and American Legion.
Grace enjoyed playing cards, especially Euchre. She also liked watching the St Louis Cardinals, boating, camping, reading, and word search puzzles as well as spending time with her children and grandchildren.

Mass of Christian Burial will be held at 10:30 a.m., Saturday, July 2, 2022 at St. Mary’s Catholic Church in Albia with Father Mark Yates, C.PP.S. officiating. Interment will follow in St. Mary’s Cemetery followed by a luncheon at the St. Mary’s Catholic Church social hall. Visitation will take place on Friday, July 1, 2022, opening to the public at 2:00 p.m., with Grace’s family present to greet friends from 5-7 p.m., Friday evening at Sinnott Funeral Home in Albia. St. Mary’s Altar and Rosary will be reciting the rosary at 4:00 p.m. at the funeral home. Online condolences may be left for the family at sinnottfuneralhome.com or the Sinnott Funeral Home Facebook page. In lieu of flowers, memorials may be directed to the family and will be determined at a later date.