In Memory of
George
Rinehart
1926 - 2018
Click above to light a memorial candle.
Memorial Candle Tribute From
Sinnott Funeral Home
"We are honored to provide this Book of Memories to the family."
View full message >>>
Send Flowers
Menu 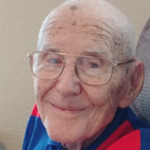 George J. Rinehart, 92, passed away on September 18, 2018 surrounded by family. He was born to Hazel and Bert Rinehart in Appanoose County on August 24, 1926. He graduated from Moravia High School and taught at Shanghai and Vosburg Country Schools before attending Iowa State Teachers College. After earning his Bachelor’s Degree he was drafted into the Army during the Korean war. He returned to ISTC, earned his Masters and met his spouse of 63 years, Virginia Williams. He taught school at Red Oak and Spirit Lake. He was Principal of schools at Spirit Lake, Lake Mills and Newton. He was Superintendent of School at Eldora and New Providence before helping troubled boys at the State Training School.Once retired, George helped care for his in-laws and his son, Steve. He was an active community member - involved in the church, the Mondamin Neighborhood Association, local politics and many service organizations. George loved to spend his days reading, gardening, feeding the birds and cheering for the Cubs. After Steve’s death, he and Virginia moved to Albia.He was preceded in death by his parents, his brother, Gerald, his son, Steve and his granddaughter, Lisa. George is survived by his wife, Virginia, his sister, Mary Lou Rinehart, his daughters, Cindy and Lori, his son-in-laws, Ken Wright and John Meister, his grandchildren, Amanda, Daniel (Katie), WIlliam, Anna (J), Ginnie and Jackson, his great grandchildren, Wesley, Ronin, Tristan, Joshua, Cole and Fran.He was best known for his wisdom and his supportive and encouraging ways. He was a gentle man. He will be missed. Celebration of Life Services will be held on Saturday, September 22, 2018, at 10:30 a.m. at Trinity United Methodist Church in Albia with Pastor John Meister and Rev. Roger Henry officiating. Visitation will be held prior to service on Saturday, September 22, 2018 from 10 a.m. - 10:30 a.m. at Trinity United Methodist Church. A private inurnment will be held at a later date in Iconium Cemetery. Memorials can be made in his name to HCI Hospice, the Albia Library or Trinity United Methodist Church.

To send flowers to the family of George Rinehart, please visit our Heartfelt Sympathies Store.