In Memory of
Floyd Franklin
Spaur
1933 - 2018
Click above to light a memorial candle. 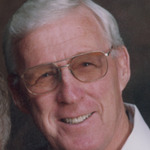 Floyd Franklin Spaur passed away on Tuesday, July 31, 2018 at his residence in Bussey. Frank was born on January 22, 1933 to Floyd “Toddy” and Verla (King) Spaur in Marion County, Iowa. Frank married Louise Vance on October 31, 1951 in Oskaloosa. He worked various construction jobs before working at Affholder Boring and Tunneling in St. Louis. This position which took him all over the country. Frank was a member to many organizations such as Integrity Lodge #584, Marion County Za-Ga-Zig Shrine and Isettas Unit, and Carpenters Union #106. He served as past mayor of Bussey. He had a reputation as a handyman in Bussey and could repair almost anything. He and his son Kevin installed some the the first natural gas furnaces in Bussey. He is survived by his children: Kevin (Diane) Spaur of Bussey, Denise (Bruce) Allen of Bettendorf, Kim (Doug) Pettyjohn of Bussey, Todd Spaur of Bussey, nine grandchildren, twelve great grandchildren; brother, Larry (Diane) Spaur of Ocala, Fl, and three sister-in-laws, Karen Spaur of Oskaloosa, Beverly Armstrong of Knoxville, and Patty Barnhill of Oskaloosa. He was preceded in death by his parents, Floyd and Verla, wife, Louise, brother and sister in infancy, Delno and Dixie, and brother, Dale Spaur.Funeral Services will be held on Saturday, August 4, 2018 at the Bussey United Methodist Church at 10:30 a.m. with Reverends Dennis and Teresa Miller officiating. Burial will follow services in Liberty Cemetery. Visitation will be held at the church on Friday, August 3, 2018 from 5-7 p.m. with a Masonic Service held at 6:30 p.m. by the Integrity Lodge #584 of Bussey. Memorials may be directed to Shriners Hospital for Children, or Twin Cedars Dollars for Scholars. Online memorials may be left for the family at sinnottfuneralhome.com

To send flowers to the family or plant a tree in memory of Floyd Franklin Spaur, please visit our Heartfelt Sympathies Store.