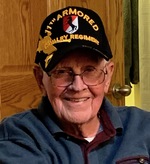 Doran Wayne Pence, age 84, of Albia, formerly of Bloomfield, passed away on Tuesday, February 4, 2020 at UnityPoint Health - Iowa Methodist Medical Center. He was born on May 23, 1935 in Bloomfield to Rayburn Burton and Lucile Velma (Pilcher) Pence.

Doran was a 1953 graduate of Bloomfield High School, where he was a proud member of the football team. He served with the United States Army with the 11th Armored Calvary and was stationed in Germany. He married Carol Joyce Pence on April 10, 1954 at the Bloomfield Christian Church, and they were blessed with two sons, Loren and Chad.

He worked for Barkers, Burdman Autoparts, and then became an owner of Bimco, until his retirement in 2004. He also farmed the family farm for several years. He enjoyed traveling, attending the 11th Armored Calvary reunions, attending the Pence Henkenius Rupe Fourth of July Celebrations, and especially enjoyed attending his children and grandchildren's activities. He had been active in the Bloomfield Development Corporation, former member of the Bloomfiled Jaycee Club, and a member of the American Legion Reed Whisler Post No. 78. Doran was an avid Iowa Hawkeye and St. Louis Cardinal fan.

Funeral Services will be held at 11:00 a.m., Saturday, February 8, 2020 at the Bloomfield Christian Church with Reverends, Jim Wakelin and Leslie Dotson officiating. Interment will follow in I.O.O.F Cemetery with military rites. Visitation will be held on Friday, February 7, 2020, opening to the public at 2:00 p.m., and Doran’s family will be present from 6-8 p.m., Friday evening at Sinnott Funeral Home in Albia. There will also be a visitation held on Saturday from 9:30 a.m. until service time at 11:00 a.m. at Bloomfield Christian Church. Memorials may be directed to the Bloomfield Christian Church, I.O.O.F Cemetery Foundation or the Welcome Home Soldier Monument. Online condolences may be left for the family at sinnottfuneralhome.com