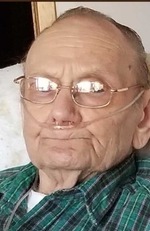 Donald Henry Zellmer, age 86, of Bussey, passed away on January 1, 2020 at the Knoxville Hospital and Clinics, Emergency Room. He was born on October 14, 1933 in Sparta, WI to Henry and Viena (Waege) Zellmer

Don enlisted with the United States Marine Corps. He married Sandra Marshall on December 17, 1955. He worked at Maytag until his retirement, and then worked various jobs to keep himself busy. He enjoyed fishing, hunting, and playing music. His real enjoyment was spending time with his family and friends.

A Time of Remembrance will be held on Saturday, January 11, 2020, from 1-3 p.m., at Sinnott Funeral Home, Gilbert Chapel in Lovilia. Memorials may be directed to family. Online condolences may be left for the family at sinnottfuneralhome.com.