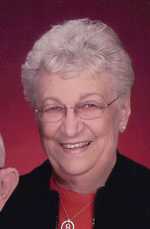 Bonnie Louise Gordon, age 91, passed away on Saturday morning, February 2, 2019 at West Ridge Specialty Care in Knoxville. She was born on May 1, 1927 to Clarence and Jennie (Nedderman) Potts.

She married Darwin “Peanuts” Gordon on Jan 16, 1949 in Albia, and they were blessed with four children: Dianne, Rick, Pam, and Ardie. Peanuts passed away on September 13, 2016.

She was a beautician, and sold Luzier cosmetics. She was a member of the Community Baptist Church in Bussey, and the Eastern Star Lodge. She enjoyed traveling, camping, crafting, playing the piano and organ, baking, making apple cider, and her specialty was “Grandma’s Noodles”. Her faith and family were her world, and she especially loved spending time with her grandchildren. Bonnie was a huge advocate for breast cancer awareness.