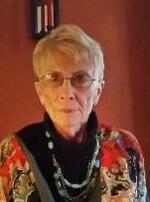 Beverly Jean Dimmitt, age 89, of Ottumwa, passed away on Friday, May 29, 2020 at Ridgewood Specialty Care, under the care of Care Initiatives Hospice. She was born on April 15, 1931in Worthington, MN to Merle and Ethyline (Bixby) Hanson.

She graduated from Graettinger High School. She became a radio broadcaster, working for KBIZ for twenty years. She married LeRoy DesCombaz, and they were blessed with two children, Vikki and Dane. They would later divorce, and she later married Robert Dimmitt.

She enjoyed painting, listening to music, dancing, shopping, going to Goodwill, and volunteering for hospice.

Bevelry has been cremated with no planned services per her wishes. Memorials may be directed to Care Initiatives Hospice. Online condolences may be left for the family at sinnottfuneralhome.com