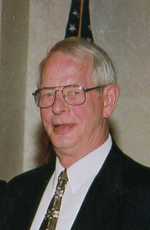 Bernard “Bernie” Lee Theulen, age 84, of Blakesburg passed away on Saturday, June 6, 2020 at the Monroe Care Center in Albia. He was born on September 15, 1935 to Frank and Mildred (Hunt) Theulen in Panora, Iowa.

Bernie graduated from Panora High School, class of 1954. He enlisted with the United States Army. He then attended the University of Minnesota, where he received his bachelors degree in mortuary science on June 3, 1960.

Bernie married Virginia Ann Guenther on August 25, 1957. They were blessed with two sons, Michael and Martin. He owned and operated funeral homes in Albia, Blakesburg, Nevada, and Manchester, until his retirement. Virginia died on March 19, 1995. He later married Helen Johnson on November 9, 1996.

He was a member of several Lions Club organizations, American Legions, Shriners, Eastern Star, and a lifelong member of the Iowa Funeral Directors Association. He enjoyed bowling, fishing, camping, spending time with family, enjoying coffee and stories with friends.

Funeral Services will be held at 10:30 a.m., Thursday, June 11, 2020 at Sinnott Funeral Home in Albia with Pastor Jim Ellis officiating. Visitation will be held on Wednesday, June 10, 2020, opening to the public at 2:00 p.m, and family will be present from 5-7 p.m., Wednesday evening. In lieu of flowers, memorials may be directed to Blakesburg Methodist Church or to Blakesburg Historical Preservation Society. Online condolences may be left for the family at sinnottfuneralhome.com.