To share your memory on the wall of Bernard Crall , sign in using one of the following options:

Bernard graduated from St. Patrick's Catholic School in Georgetown in 1953 and was valedictorian of his class. He married Charlene Anderson on November 23, 1957 at St. Mary's Catholic Church in Albia with Father Harry Linnenbrink officiating. Bernard and Charlene were blessed with four children: Cathy, Tim, Dave and Jean Anne.

After high school, Bernard worked on the family farm until enlisting in the U.S. Army in 1954. He completed basic training at Fort Riley, KS and then was stationed at Erlangen, Germany for his tour of duty. He was proud of his service to his country. Upon his return from the service in 1956, he worked at Moloney Aluminum Door Company in Albia which later became Chamberlain Manufacturing. Bernard held several management positions at Chamberlain's, eventually becoming a general supervisor of the Albia plant. He also farmed part-time during those years. After leaving Chamberlain's in 1982, Bernard returned to being a full-time farmer. His passion was raising cattle, but he also enjoyed his paint horses. He actively continued cattle farming until the Fall of 2016. Bernard loved going to cattle auctions. He had an amazing ability to "run the numbers" in his head and could figure the price of a load of cattle as well as the price per head on the spot.

His favorite activities were farming, watching the Chicago Cubs and attending his grandchildren's events. Bernard also loved dancing with Charlene and they were well-known in the community as being excellent dancers. He and Charlene even won a foxtrot championship in 1973 of which they were quite proud.
Bernard was a good friend to many, and he and Charlene rarely missed a reception or party for their family and friends. Most of all, he loved his family, his farm and his Catholic faith.

A private Funeral Liturgy Outside of Mass will be held on Saturday, April 4, 2020 with Father Mark Yates, C.PP.S. officiating. Interment will follow in St. Mary's Cemetery in Albia. In lieu of flowers, memorials may be directed to the family in care of the Sinnott Funeral Home, 2030 Hwy 5, Albia, Iowa 52531. Memorials will be designated at a later date.  A video recording of the funeral service will be available at 12:00 noon on Saturday, April 4, 2020 on the St. Mary’s Albia Faith Formation Facebook page for all who would like to view the service.
A Celebration of Life service will be held once the COVID-19 regulations are lifted. Online condolences may be left for the family at sinnottfuneralhome.com.
Read Less

To send flowers to the family or plant a tree in memory of Bernard G. Crall , please visit our Heartfelt Sympathies Store.

Receive notifications about information and event scheduling for Bernard

There are no events scheduled. You can still show your support by sending flowers directly to the family, or planting a memorial tree in memory of Bernard G. Crall .
Visit the Heartfelt Sympathies Store

We encourage you to share your most beloved memories of Bernard here, so that the family and other loved ones can always see it. You can upload cherished photographs, or share your favorite stories, and can even comment on those shared by others.

Posted Apr 04, 2020 at 07:50pm
Bernard brought back a bottle of German whiskey with him when he returned to the States after he was Honorably discharged from the U.S. Army. He gave me a shot, my second shot ever. It burned my throat so bad, worse than any sore throat. I can still see his big old smile at my grimacing. I was 10 or 11 years old at the time.
Comment Share
Share via:
MA

Posted Apr 04, 2020 at 07:41pm
We were putting up hay one summer day and Bernard started to sing. Then he tried to convince me that he sounded just like Ruby Vallee. I remember he sounded pretty good, but he did not convince me. I was about 12 years old.

Posted Apr 04, 2020 at 06:14pm
Charlene and family: My sincere condolences to you and your family ! Sounds like your life with Bernard was a wonderful journey! Will keep you all in my prayers ! Pauline McGinn Steinbach

Posted Apr 04, 2020 at 02:29pm
Keeping the entire family in my thoughts and prayers. God Bless Bernard and his loved ones. Im sorry for your loss.

Posted Apr 03, 2020 at 12:50pm
Charlene and family, our sympathy and prayers for comfort at this time.
For our old time neighbor Bernard, and Georgetown Ball Team member, happy memories. 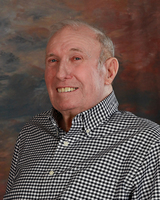