In Memory of
Arlene Louise Stewart
Gilbert
1925 - 2018
Click above to light a memorial candle. 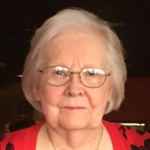 Arlene Louise Stewart Gilbert, age 92, formerly of Albia, passed away July 31, 2018 at Trinity Center at Luther Park in Des Moines, Iowa. Arlene was born in Mahaska County to Earl L. and Elsie M. Bain Stewart on Dec. 8, 1925. She graduated from Albia High School, class of 1944. On Jan 23, 1944 she married Lester L. Gilbert. To this union 4 children were born, Larry, Beverly, Terry, and Judith. Lester and Arlene were later divorced. With the help of her parents they raised her 4 children together. She worked at the box factory in Centerville while doing painting, wall papering, cleaning houses and ironing for others. She later worked at Maloney's and retired from Chamberlain Manufacturing Company in Albia after 27 years. After retiring she worked a few years at Albia Super Valu in the deli. Arlene was a member of the Trinity United Methodist Church and the Sunday School Superintendent for many many years, a member of the Tri-Joy Sunday School and also hosted the Lenten Bible Group. She was always caring for others, taking them to church, the grocery store, or a doctor’s appointment or anything they needed. She loved camping, taking train trips, car rides, playing pitch, many games of dominos and kings corner with her family and friends. She enjoyed attending her grandchildren and great-grandchildren’s events. Arlene was always sewing, cooking, working in her yard and garden, and canning tomatoes and corn. She enjoyed her daily swing on the front porch . There were many talks that happened on this porch swing. She loved to embroidery and make baby blankets and table tents for her grandkids and friends. What a blessing, that she made enough blankets in advance for all the grandkids before they were even born. Some of the many great things she made were cherry jelly, monster cookies (even once with skittles) chocolate cake with divinity frosting, congo bars, cut-out sugar cookies, sour cream raisin pie (for her son-in-law’s), Jell-O and oh the many salads. She loved to hold and sing to the kids and they would go right to sleep because she could not sing or carry a tune. She was a very loving, gentle and caring to anyone she met and she cherished her family. She is survived by her daughter Judith Griffin (Stephen) of Altoona, 6 grandchildren Michael Heyland (Sandra) of Brisbane, Australia, Angela Gilbert Bregar of Knoxville, Melissa Woodruff (Scott) of Urbandale, Heather Pidal (Willie) of Plantation, Florida, Monica Burress (Jesse) of Cedar, Shane Gilbert (Leslie) of Newton; 36 great-grandchildren and 5 great-great-grandchildren.Arlene was preceded in death by her parents, Earl and Elsie, her brother Dale who was killed in WWII at the age of 23, her son Larry who was killed at the age of 38 in a motorcycle accident, her daughter Beverly died at the age of 57 from lung cancer, and her son Terry died at the age of 66 from a blood clot. A granddaughter Gina Duffy at the age of 46, a great-granddaughter Kinsley Burress died shortly after birth in 2010, and a son-in-law, Leo Heyland who died in 1992. She will be greatly missed by her daughter and family.Visitation will be at the Sinnott Funeral Home in Albia on Friday, Aug 3, 2018, opening to the public at 4:00 pm, and Arlene’s family present from 5-8 pm. Funeral Services will be held at the Trinity United Methodist Church in Albia with Rev. Roger Henry officiating on Saturday, Aug 4, 2018 at 11:00 am followed by a lunch then burial will be at the Oak View Cemetery in Albia.In lieu of flowers and plaques a memorial will be set up for her great-granddaughter Ireland Burress who suffers from Tuberous Sclerosis Complex and Trinity United Methodist Church. Online condolences may be left for the family at sinnottfuneralhome.com.

To send flowers to the family or plant a tree in memory of Arlene Louise Stewart Gilbert, please visit our Heartfelt Sympathies Store.