In Memory of
Anne A.
Shovlain
1926 - 2018
Click above to light a memorial candle.
Memorial Candle Tribute From
Sinnott Funeral Home
"We are honored to provide this Book of Memories to the family."
View full message >>>
Send Flowers
Menu

Obituary for Anne A. Shovlain 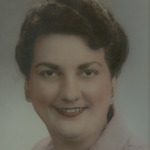 Anne Agnes Pasut Shovlain 92, of Albia, passed away May 19, 2018, at the Monroe County Hospital, under the care of HCI Hospice with her loving family by her side.Anne Agnes Pasut was born January 8, 1926, at Hocking, Iowa to Emil Michael and Mary Rose Vitko Pasut. She was the third of seven children born to this union. She had several nicknames her parents and siblings loving called her Jody, her extended family knew her as Hannah and the neighbors called to her as Agnes. Anne began her education at Hocking School and continued at Elmora Country School. She graduated from Moravia High School in April 1943. She was an honorary member of the Albia High School Class of 1943.In 1940 her family had to go back to using the original spelling of Pesut so that her Father could receive his United States Citizenship. Shortly before World War II ended the family returned to using Pasut. Her oldest brother Emil John kept the last name of Pesut until his death. After she graduated, she entered the workforce in Des Moines first as a nanny and later worked in several factories. In the 1950’s she moved to Cleveland, Ohio, and worked there for several years. She moved back to Albia in the late 1950’s and was employed by Success Barber and Beauty Supply in Moravia.On July 22, 1961, she was united in marriage to John Patrick Shovlain at Saint Mary’s Church in Albia. To this union they were blessed with two children, a daughter Mary Lisa and one son Thomas Timothy. After her marriage she and her husband lived in Weller. During this time, she was a stay-at-home mother caring for her children. She and her husband moved to Albia in the summer of 1967.In late 1967, she began a long and meaningful career with the Monroe County Public Health Nurses Office as a Homemaker. Her career expanded to 35 years. She took two years off to care for her mother who had a severe stroke. She retired in 2002. She was co-owner and bookkeeper of the John P. Shovlain Bulldozing Company from 1969 to 1982. Anne was a member of Saint Mary’s Catholic Church and the Alter and Rosary Society in Albia. While she was living in Weller she was a member of Saint Mary’s Catholic Church and the Altar and Rosary Society. She was a very strong member of the Democratic Party. For nearly forty years she was a Third Ward Election Official. Anne was very proud of her Croatian and Slovak Heritage. Her father came to America on October 13, 1910. Her Grandfather Vitko arrived in America on March 1, 1900. She was able to speak and understand both languages. She learned at an early age how to make many of her family’s ethnic dishes.She had many different hobbies during her life time which included painting and wallpapering. During the winter she loved to crochet, make rag rugs, and sew clothes for herself and her family. She was an excellent seamstress. She loved to spend the summers outside planting and raising big beds of flowers. But her favorite thing to do was to plant and tend a big garden and can the produce. Anne was an excellent cook and baker. She was well known for her bread, cinnamon rolls, poppy seed rolls and pies among other baked goods. She was still mowing her yard last summer on a riding lawn mower at age 91 and still cooking until last month.The thing that she enjoyed most of all doing in later years was to escape the confinements of home and find a good Casino to play the penny and nickel slot machines. She did win many times but would never admit to it!Anne’s proudest achievement was her family. She was a strong believer in a college education. Her proudest and most personal achievement was being a Breast Cancer Survivor for Thirty-Four Years!She was also proud of being a member of the Generation that NBC Anchorman Tom Brokaw coined “The Greatest Generation.” Characteristics of this generation include the following: personal responsibility, humble nature, work ethic and a faithful commitment. Those family members who preceded Anne in death are her husband John Patrick Shovlain on September 10, 1997, her father and mother, sister Louise Mary Pasut (Bernard Leonard) Wesoloski, two brothers Robert David Pasut and Emil John Pesut. One nephew Robert David Wesoloski, her parents-in-law Thomas Timothy and Mary Martha (Mayme) Flahive Shovlain, one brother-in-law Vincent Thomas (Lorraine Marie) Shovlain, three sisters-in-laws Marjorie Elizabeth (Robert William Ringe and Dale Walter Pease) Ringe Pease, Mary Maxine (Anthony) Brozovich and Catherine Eileen (Gus Thomas) Vack. Omnes, Requiescat In Pace.Anne is survived by her children Mary Lisa Shovlain and Thomas Timothy Shovlain. Three brothers John Daniel (Margaret Alice) Pasut, James Edward (Elaine Jeannette) Pasut, William Joseph (Marion Elaine) Pasut and two sisters-in- laws Kathleen Rose Pesut and Mildred (late Evert Charles) Shovlain Engelson and a host of Pasut and Shovlain nieces and nephews. She is also survived by two maternal cousins that she was very close and loved dearly Helen Rita Sabol Carabotta and Janet Josephine Vitko. A Mass of Christian Burial will be held at 10:30 a.m., Wednesday, May 23, 2018 at St. Mary’s Catholic Church in Albia with Father Michael Volkmer C.PP.S. officiating. Burial will follow in St. Mary’s Cemetery in Albia. Visitation will be held on Tuesday, May 22, 2018, opening to the public at 1:00 p.m., with Anne’s family present to greet friends from 4-8 p.m. at Sinnott Funeral Home in Albia. There will be a rosary conducted by St. Mary’s Altar and Rosary at 4:00 p.m., and a Christian Wake Service held at 6:00 p.m., Tuesday evening. Per Anne’s wishes the casket will remain closed.Memorial Gifts may be given in her name for Mass Stipends, Saint Mary’s Church and HCI Care Services. Online condolences may be left for the family at sinnottfuenralhome.com. Arrangements entrusted with Sinnott Funeral Homes. Her children wish to thank HCI Care Services for their dedicated care and support of Anne and her family these past few days. As well as the Nursing Staff at Monroe County Hospital. They are truly Angels!We Love You Mom!

To send flowers to the family or plant a tree in memory of Anne A. Shovlain, please visit our Heartfelt Sympathies Store.