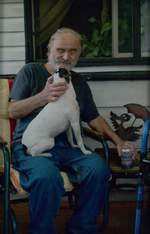 Albert “Butch” Lee Bregar, age 74, passed away at the West Ridge Specialty Care in Knoxville, under the care of Care Initiatives Hopsice. He was born on June 30, 1946 at his family home in Bussey to Albert Joseph and Nellie (Green) Bregar. He graduated from Twin Cedars High School in 1965. He then enlisted into the service with the United States Navy. He married Karen Saso on September 4, 1976 and they were blessed with four children, Albert, Nick, Shasta and Shanna.

Butch was a lifelong truck driver, working for various trucking companies including Benn Shinn and Foodliner. He was a member of the VFW in Knoxville for many years. In his younger years, he enjoyed squirrel and rabbit hunting. His children will always remember him coaching them in Tee Ball and taking them roller skating. He enjoyed visiting with his high school buddies which included gravel traveling, sharing stories, making memories and enjoying a nice cold drink. Overall he was a family man, he loved his family; especially his grandchildren which their ages range from twenty-one months to twenty-two years old. He will always be remembered in Lovilia for taking out the whole front of a car lot.

Funeral Services will be held at 10:30 a.m, Tuesday, October 6, 2020 at Sinnott Funeral Home - Gilbert Chapel in Lovilia with Pastor Andy Tuttle officiating. Visitation will be held on Monday, October 5, 2020, opening to the public at 2:00 p.m., with Butch’s family present to greet family and friends from 4-6 p.m., Monday evening at Sinnott Funeral Home - Gilbert Chapel in Lovilia. Memorials may be directed to the VFW, John Myers in Knoxville. The family invites everyone to Butch’s lifelong home after the service on Tuesday for a final time of sharing. (506 5th St. Bussey, Iowa) Online condolences may be left for the family at sinnottfuneralhome.com